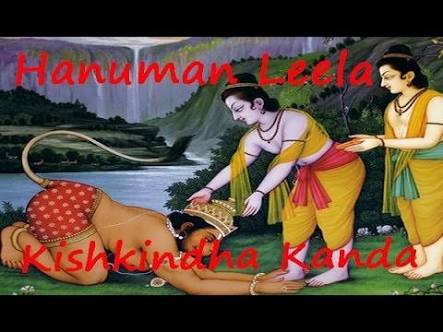 Or You might be Bhagwan himself:  the reason of all existence and master of all beings-who has taken the human avatar to alleviate the heavy burden of evil doers on this earth,  and to help us all to cross the sea of existential pains.( Are you Bhagwan himself? Hanumanji queries.)

( Lord Ram said-) We are the sons of  Dasrath-the King of Kosala. We have obeyed  our father ‘s words to reach these forests. We are named Ram and Laxman, and we were accompanied by a beautiful lady.

Here, in these forests, the rakshasas  stole (my wife) Vaidehi. Hey, Brahmin! We are wandering about in search of her. We have told you our story. Now, you tell us yours.

Recognising the Lord, Hanuman clutched  His feet and fell on the ground( He did danda namaskar).( Lord Shiv says: )’Hey Uma! That happiness is beyond words (ineffable).His body is thrilled, words cannot escape his mouth.Hanuman is gazing at the beautiful form of His Lord.’

Then Hanuman composed himself and praised the Lord, his heart was filled with jubilance on recognising his Master. ( Then Hanumanji said) Hey Lord, my asking was justified, but how come You are asking like a mere human being?

( I saw You after the lapse of aeons, and that too clad in the dress of a sanyasi,  I failed to recognise you and according to my monkey-brains, I asked you about yourself! But Lord, You are You! How come you are asking this monkey to narrate his story?)

I am  meandering through the world dazed by Your Maya- and consequently did not recognise my own Master!

First, I am a dullard; second, I am a victim of Maya( illusion), third, my heart is wicked and ignorant. And now, My Compassionate Lord! It seems You too have forgotten me!