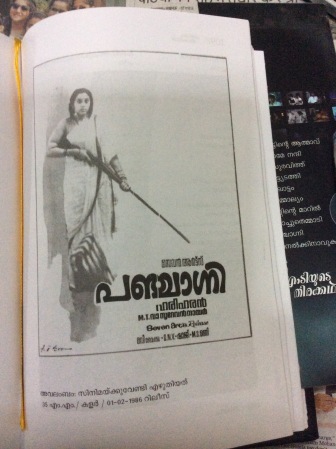 The room is in the first floor of the office block in the Jail Complex.

The Superintendent is past fifty years of age. When he raises his head, after signing some papers,  the Matron, a forty five year old woman, salutes him.

Matron: Indira refuses to have food. It is the fourth day today.

Assistant Jailor and the Jail Doctor at the door.

The Doctor pays respect in the normal way.

The Supdt is pondering deeply.

Asst.Jailor: Sir, we can charge under Section 45…

The Supdt motions with his head, negating the suggestion.

Doctor: She is very weak

Matron: If we manage to hold her for you, can you not give her glucose or some stuff?

Asst.Jailor: Is her mother’s condition truly serious,  Sir? Has the verification report arrived?

‘I have referred the matter to the IG. Let the decision be from there.’

An orderly arrives,( dressed in the Jail inmate’s dress), with tea for them on a tray

While serving, he comments sycophantically: ‘Too much freedom in the Jail nowadays! This is the result of that!  It was totally wrong to banish whipping.’

The phone rings. The Supdt picks it up,  says, ‘Yes’ , and then his face expression changes to obsequiousness.

He keeps the phone down.

‘The IG has referred the matter to the minister. But  it seems that some journalist has reported about the fasting incident in the Jail ! Hell!’

The mercury rises in the BP apparatus.

The Doctor examines her as she lies on a bed.

The Matron and a nurse along side.

Office of the IG Prisons

The IG throws a file to the police official standing in front of him.

‘Refer the matter to the Parole Board.’

The courtyard of the Jail

A female inmate: If you get out on parole, do you have to report to the police station daily?

Hey, no! When I went, it was a good guy- as Inspector! He asked me to come just once a week.

The woman who had spoken on attacking her husband:

When I went on parole, I was  only apprehensive on whether I would end up before that son of a bitch!  I might have grabbed the cleaver again, forgetting  that the punishment could  get doubled  !

The Expert: No doubling ! All that is nonsense. It is not  there in the law.

A long whistle. The women stop work and return to their Cells.

The office of the Jail Supdt

Indira stands in front of him, dressed in the convict’s uniform.

She is totally exhausted.

She signs on the paper.

She looks at him.

The Supdt checks the accounts and the voucher placed in front of him by a clerk.

‘You have some money as savings. You can take that. Also get your dress.’

He rings the bell.

He looks at Indira- she stands silent, emotionless. He thinks for a moment and then with great soberness:

‘ If you start acting as if the revolution has reached the next street…! Hmm..The Government can cancel the parole any time. Up to you’

It is a warning, also an advice.